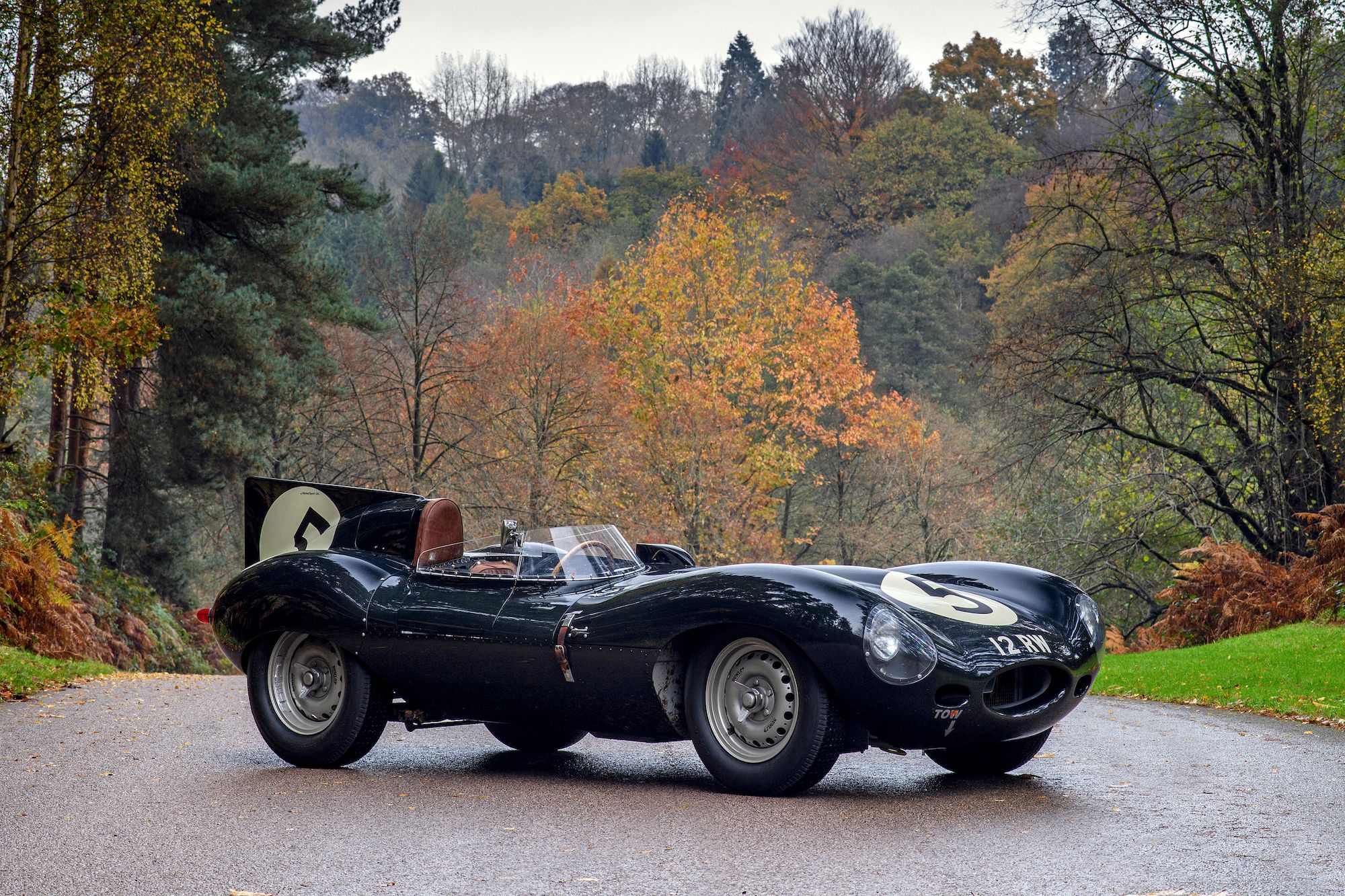 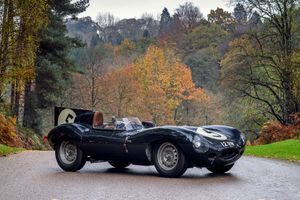 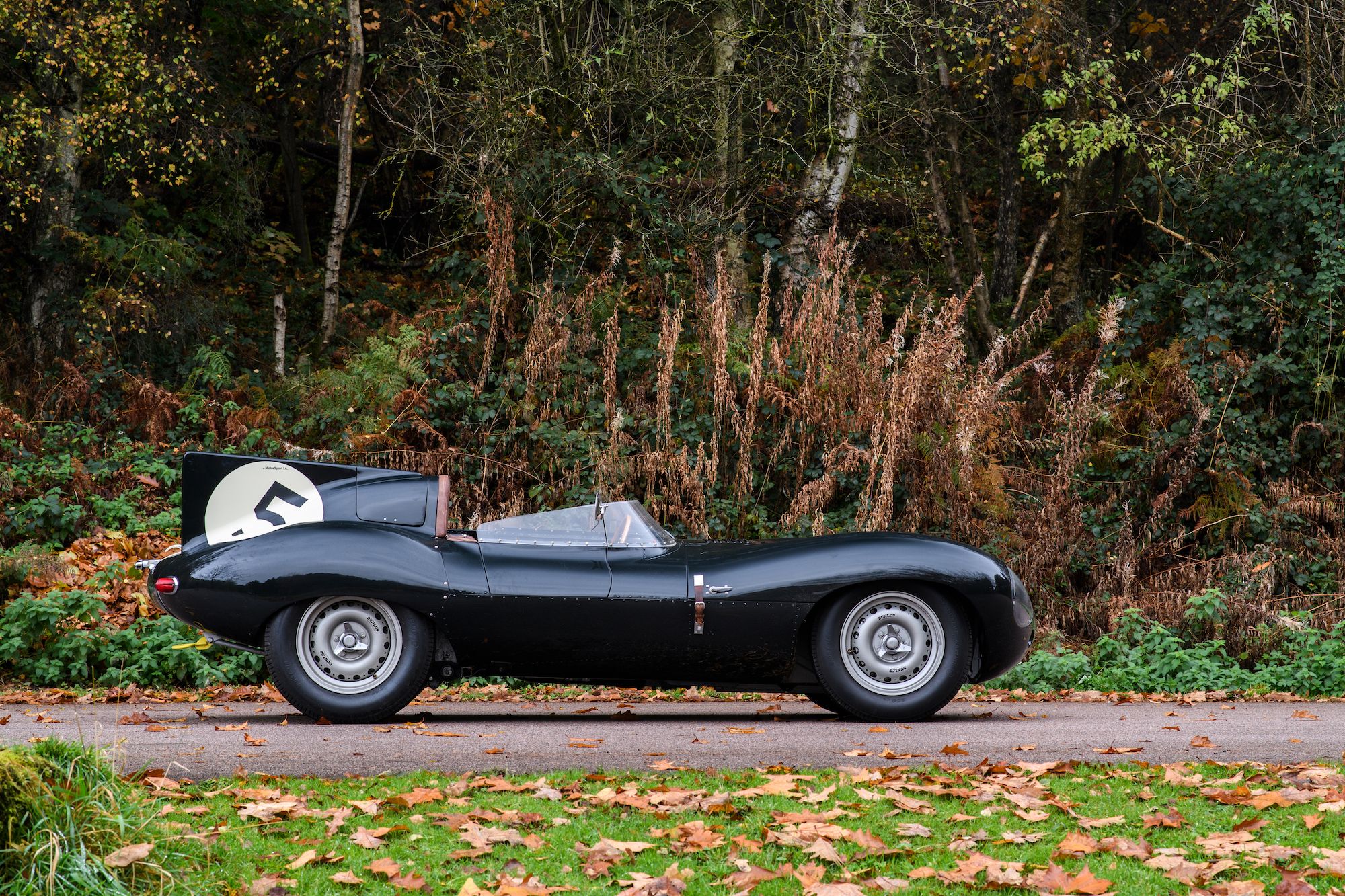 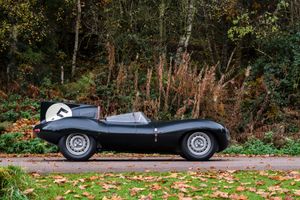 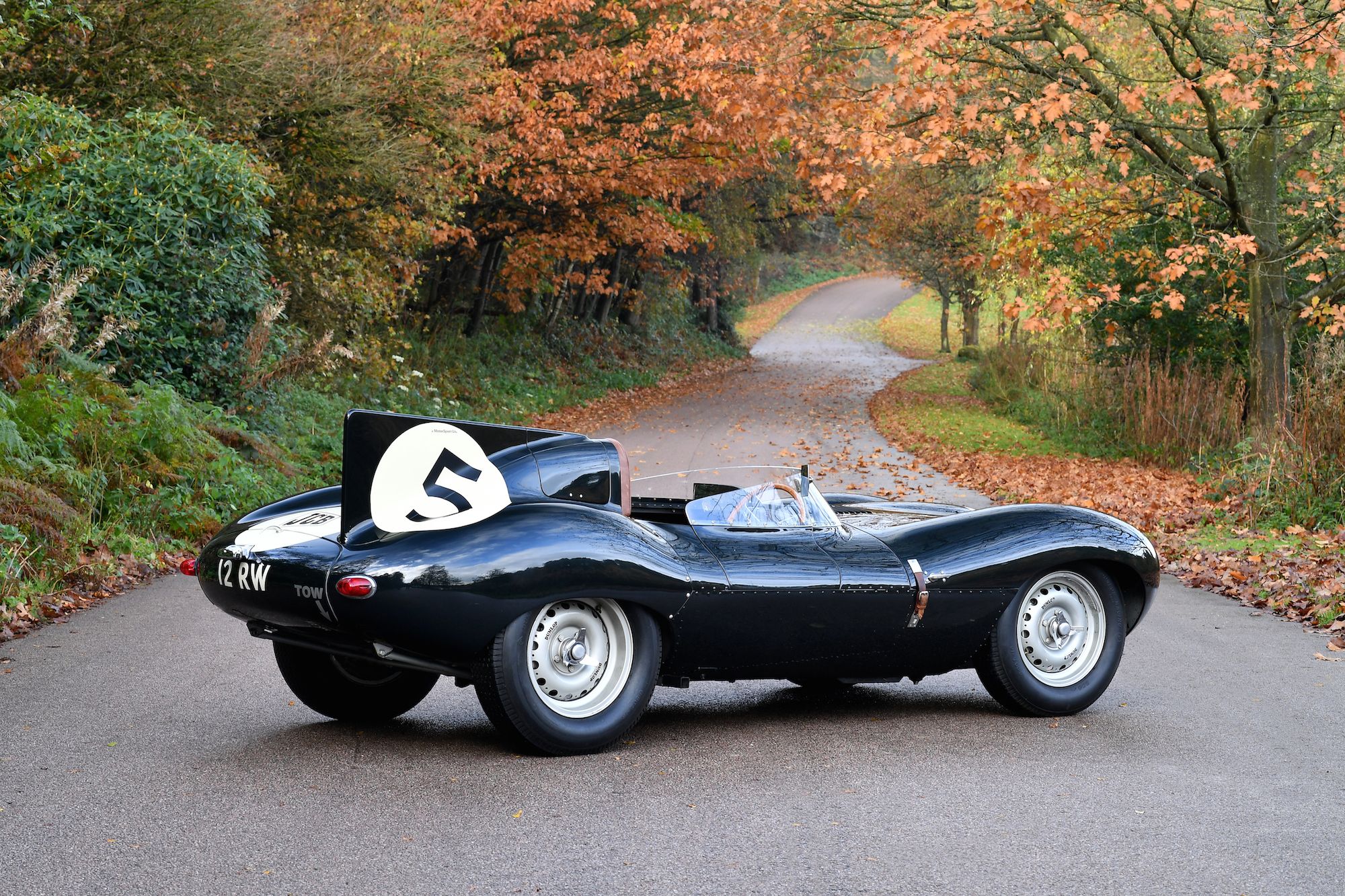 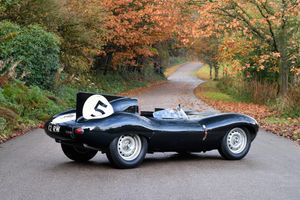 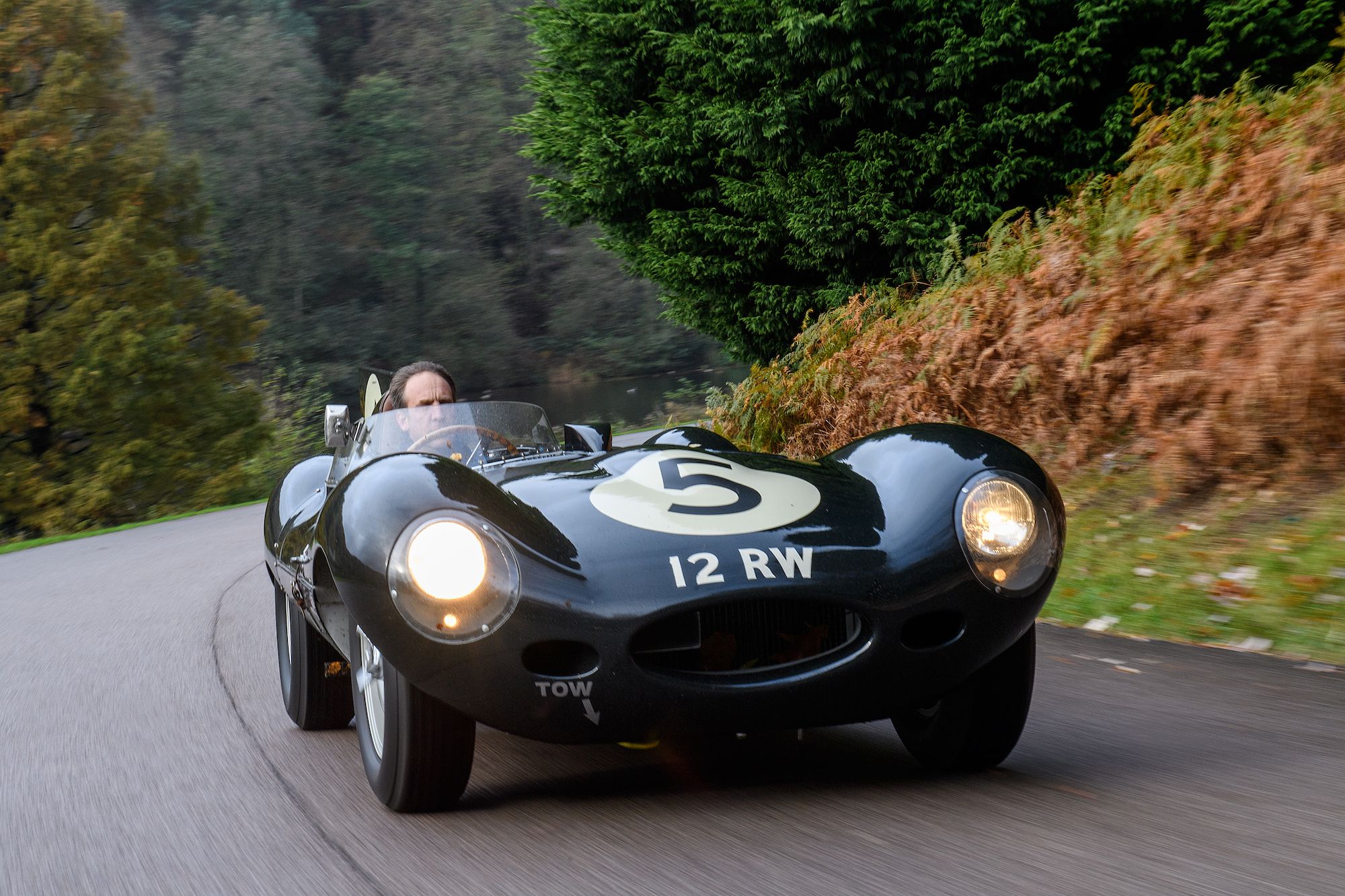 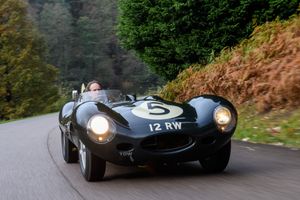 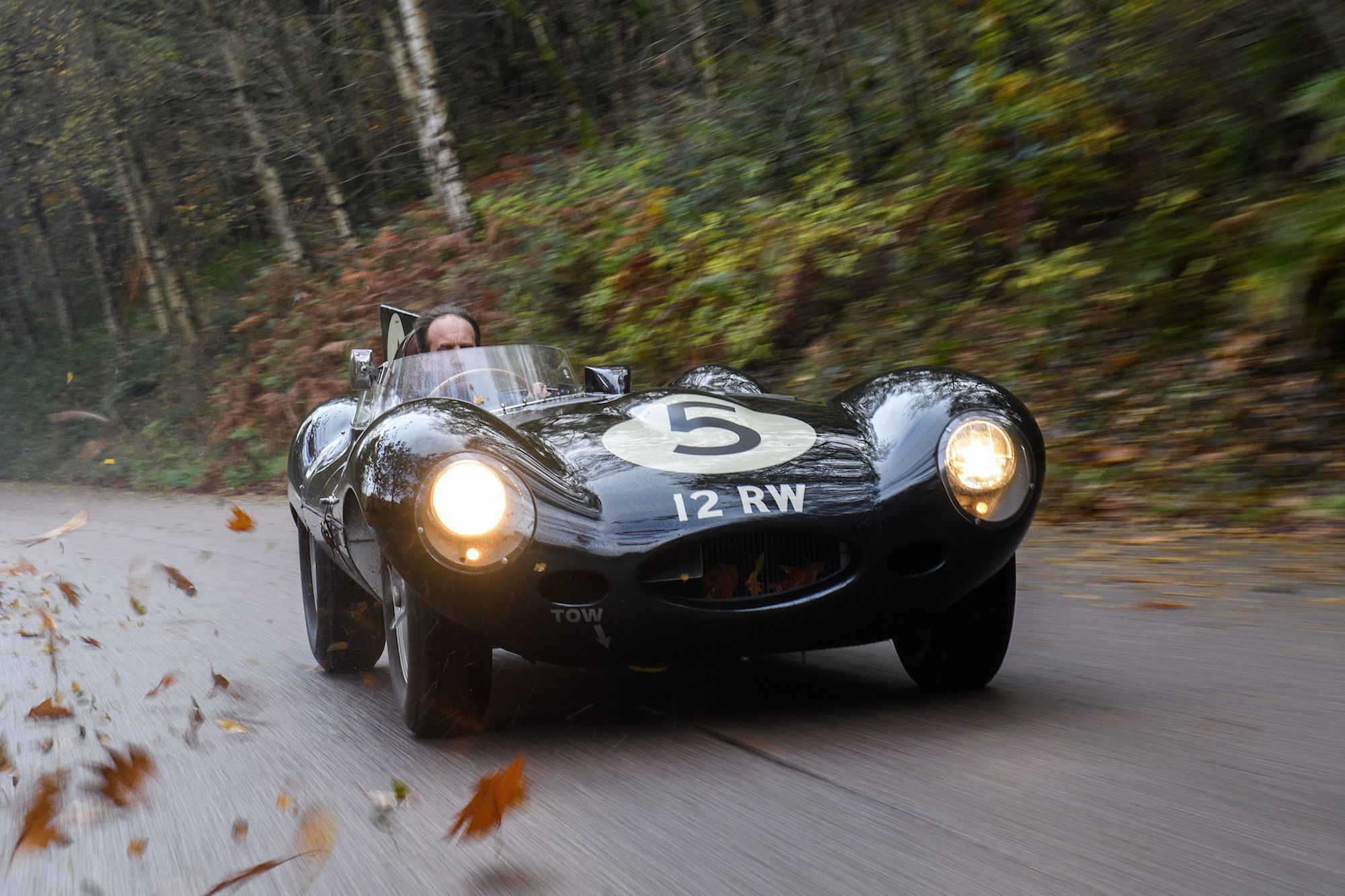 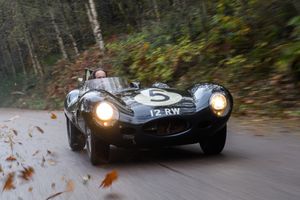 After the glorious victory by Jaguar at Le Mans in 1953 which saw the C-Type achieving three of the top four places, it was evident that the 120 based racer was nearing the end of its competitive limitations and a new car was required to stay at the top. The D-type was revolutionary in its design. One of the first to claim unitary monocoque construction rather than the C-types steel tube space frame. New also was the dry sump lubrication which enabled the engine to be mounted lower and canted at an angle. The proof was in the pudding when one of the new D’s hit close to 170 mph on the Mulsanne straight at Le Mans trials in 1954. Alas, in one of the closest finishes, Hamilton and Rolt were deprived a second win and by a tiny margin were pipped to the post. However, the hat-trick of D-type Le Mans victories was performed from 1955 –57 with much success also achieved throughout the rest of the world.

XKD 526 was the first D-type to enter Australia and was supplied to the Anderson company. They were the Jaguar agents for Brisbane and the owners were the husband and wife team of Cyril and Doris ‘Geordie’ Anderson. Ownership was also shared with Bill Pitt who became the regular and very successful pilot of 526 though Geordie was quick to set her own records first!

In January 1956 at Strathpine, she was timed at 120 mph over the flying quarter mile, still in third gear apparently… Not content with that she tried the following month at Leyburn sprints and achieved a new state record of 135.2 mph over the quarter mile.

Pitt, eager to see some competition himself continued to race frequently and successfully throughout the rest of the year including finishing 2nd to Stan Jones (father of F1 champion Alan) in a Grand Prix Maserati 250F at Bathurst. He also notched up impressive results at Lowood and Albert Park. In December 1956 Pitt rolled 526 whilst competing in the Argus Cup at Albert Park. A very fast circuit which in period ran counter-clockwise. Fortunately, Pitt was unhurt and the car was repaired and competing again from February ’57 onwards maintaining strong results.

In order to stay competitive, parts were supplied by the factory in June 1959 to update 526 to 3.8 Litre specification. In late ’59 the D was sold to Leaton Motors, New South Wales who repainted it yellow with a black stripe. Interestingly at this time Leaton Motors also ran a C-Type in the same livery. Frank Matich and Doug Chivas continued to campaign 526 into the early 60’s. At this point which is a great testament to the incredible enduring competitiveness and appeal of the D-type an aluminium fastback hard top (still with the car today) was fitted in order for 526 to run in the GT classification. Matich won at Warwick Farm in July in the Australian GT Championship and again at the New South Wales Championship later that year.

With continued racing exploits throughout the Sixties, the previous owner who acquired the car in 1967 removed and stored the hardtop and ultimately gave 526 a well earned rest from racing before subsequently restoring the car with the highly respected outfit, Classic Autocraft. Following the completion of the works in 1982 the D type rightly assumed a more leisurely lifestyle and sometimes prior to the Grand Prix visiting racing luminaries were granted an audience with 526.

Upon the present owners acquisition of 526 and the return of the car to the UK, it was entrusted to the pre-eminent Jaguar racing specialists CKL Developments in conjunction with Gelscoe Motorsport to sympathetically further restore and refurbish what was needed to bring the car up to the very high standard that it enjoys today. Raced at this years Revival meeting at Goodwood, eligible of course for so much more, the D will always have a seat at the top table in the pantheon of Fifties sports racing cars. The most attractive and evocative period before function irreversibly began to edge out form.